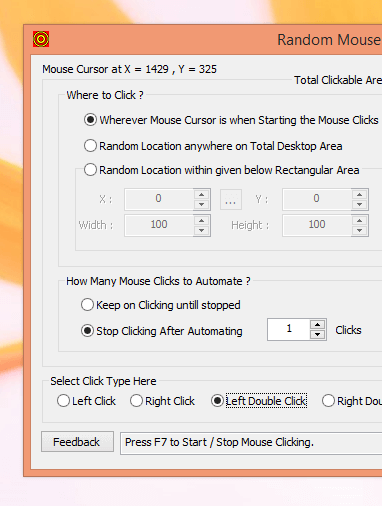 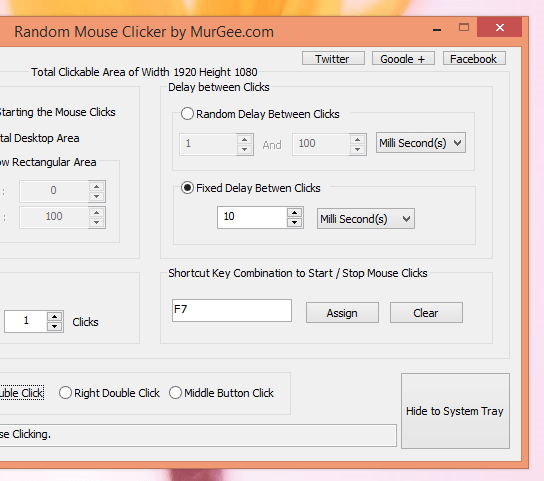 The above Screenshot displays a Keyboard Shortcut configured to do Double Click on the press of Keyboard Shortcut F7. Yes you can use any other Keyboard Shortcut as the Keyboard Shortcut Key is configurable in this software as displayed in the above screenshot and this Video Tutorial. Whether you are helping somebody learn how to use Mouse or you need a simple Utility which can do the Fast Clicking for you, this Mouse Clicking Application can be of real help. In case you need something really advanced mouse clicking software, do have a look at the Game Clicker presented earlier, which offers much more functionality.

Download this Windows Software Application for Free and give it a try. This Application Setup does not requires Admin Access and has been tested with almost every Anti Virus Software to be clean. Once you are done setting up this Mouse Automation Program as Double Clicker, you can hide it to Notification Area and just use the Keyboard Shortcut to Simulate Double Click whenever you want. Yes this Double Clicker works on Microsoft Windows 8.1, Windows 8, Windows 7, Windows Vista and even on Windows XP.

This post provides a Macro Recorder for Mac which allows to Record and Playback Keystrokes on Mac. Whether you wish to automate simple or complicated sequence of keystrokes, the Macro Recorder presented here can be used to Record Keystrokes, Save them to a File and Playback the Recorded Keystrokes on Macintosh 10.6 or later versions. Apart from Keystrokes, you can also record Mouse Movements and Clicks with this Macro Recorder. In order to record Keystrokes you need to provide Access for Assistive Devices from Accessibility tab of System Preferences. Starting with Macintosh Version 10.9, the Access for Assistive Devices is provided on a per Application basis. 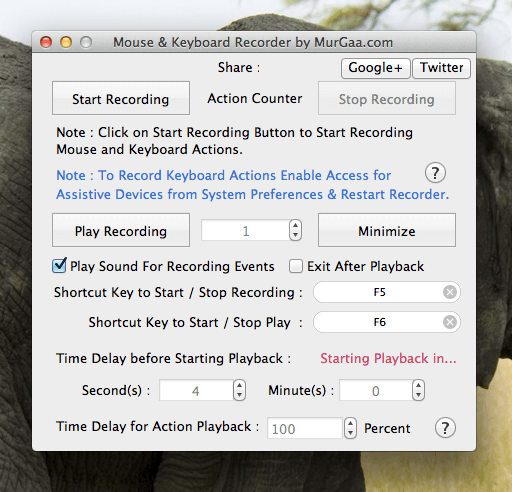 Record and Playback Keystrokes on Mac 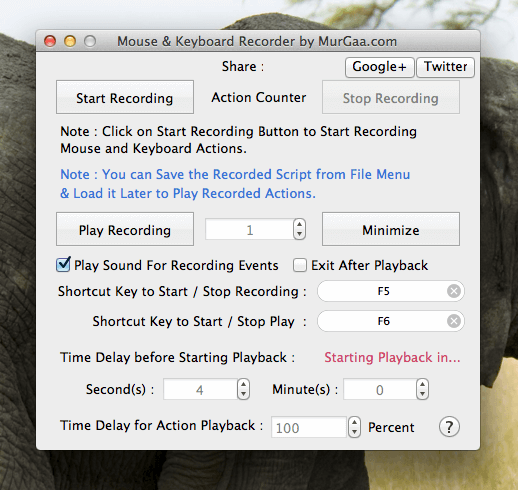 Once the Macro Recorder is ready to Record Keystrokes, the Informative Text displays another informative text which informs you that you can save the Recorded Keystrokes in a File and play them at a later date / time. In order to Save or Load Recorded Keystrokes, you need to use the File Menu of the software as displayed in the screenshot below.

Save or Load Recorded Keystrokes from File Menu 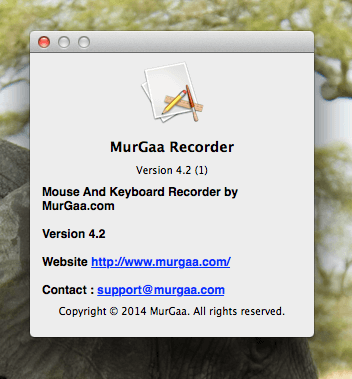 Mouse and Keyboard Recorder with Playback for Macintosh

Download this Macro Recorder  on your Mac running Snow Leopard (Mac 10.6), Mac OS X Lion (Mac 10.7), Mountain Lion (Mac 10.8) or Mavericks (Mac 10.9) or Watch a Video Tutorial which displays how to Record Keystrokes with this Macro Recorder for Mac. This Macintosh Utility is a trial application and requires you to pay $5.00 registration fees after the trial usages have been used. There are no Limitations in the Trial version of the software and works as good as Full Registered Version. Apart from Recording and Playing back Keystrokes on your Mac, you can also record Mouse Movements and use this Application as a Keyboard and Mouse Recorder with Playback feature. Apart from defining basic parameters for creating the Scheduled Task with Windows Task Scheduler, you need to specify the File path of your Mouse Clicking Script File. As displayed in the above screenshot, the .mcs file has been selected using the browse button in the Task Wizard. Before adding a Task for running the .mcs file, so make sure that the Mouse Clicking Scripting does clicks exactly where you want it to click. 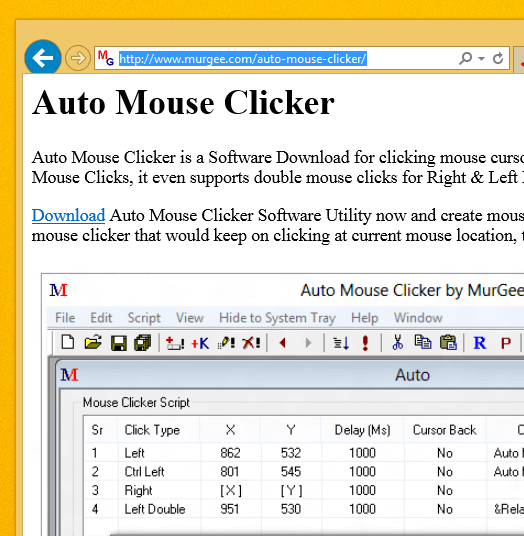 Software to Store Mouse Clicks in a Macro Script File

A Unique Mouse Clicker especially designed for Games is presented in this post. The Game Clicker presented here is capable of doing Automated Mouse Clicks in a controlled way. Screenshots and Video Demonstration of the Game Clicker presented here can be used to view and understand all the features of this small software program. Whether you wish to play an online Game in a Browser or a Non Direct X Game which is installed on your Windows Computer, the Clicking Bot within the Game Clicker can get you highest score and save your fingers from clicking too much.

Out of the many configurable options available in this Game Clicker, the above screenshot displays few options. Rest of the configurable options are available in Right Click Menu of the System Tray Icon and also from the System menu of the Software. You can invoke the System Menu of this Program by doing a Left Mouse Click at the Top Left Corner of the Program as displayed in the screenshot below. 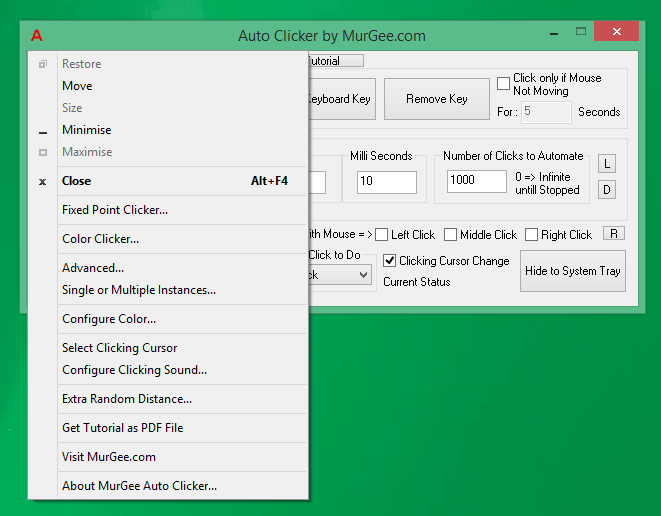 Download a Video Tutorial of this Mouse Clicking Bot and watch it in your own Video Player like Windows Media Player or any other Video Player. As evident from the above screenshots, the Auto Clicker has all the features to be used as Game Clicker. Given below are few of the features which can help you excel in your Games. Yes instead of reading further you can even download and try out this software on your Windows PC for Free and it works on all the Windows Operating Systems including Windows 8.1 , Windows 8, Windows 7 and other Windows Versions later than Windows 98 starting with Windows XP.

Games now a days are becoming more and more sophisticated and interesting too. Whether you play a single Game or Multiple Games, correct usage of the Game Clicker presented in this post can help you achieve better ranking, more points and definitely save you lots of time. Although basic scripting for Mouse Clicks can be done easily with this program, you can alternatively explore the features of Advanced Auto Clicker which is definitely much more powerful tool to automate Mouse, Keyboard and other Actions. When using any of the Bots mentioned in this post, do take caution and in case of confusion, do ask someone. Remember that the Bots do not have mind of their own and they are supposed to do whatever they are ordered to do. Playing Game with the help of Game Clicker requires proper planning and understanding of the Clicker as well. 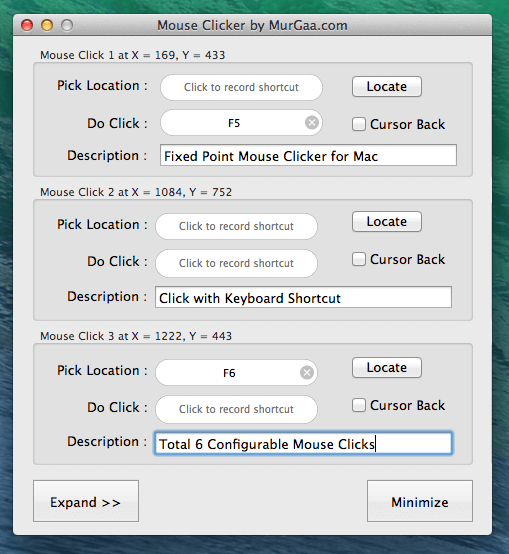 The above Screenshot displays 3 separate Mouse Clicks which are configurable and are configured to do a Left Mouse Click at specific screen locations identified by Screen’s X and Y Co-Ordinates. All the Settings of the Software are saved automatically so that once you configure the software, you can use the same settings later on as well. In case you would like the Fixed Point Mouse Clicker to do a Mouse Click at specific screen location and then bring the cursor back to original  Screen Location, all you need to do is Check the Check-box named Cursor Back. The Button titled Locate allows you to locate the stored Mouse Click Location without actually doing a Mouse Click. 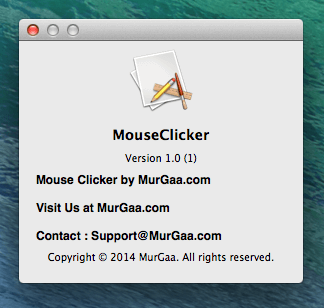 Download Fixed Point Mouse Clicker and try it for Free on your Mac OS X running 10.6, 10.7. 10.8 or even on 10.9 Mac. With this Fixed Mouse Clicker for Mac, the speed of Mouse Clicking depends on how fast you can press a keyboard shortcut. Using Function keys can be an easy way to do Mouse Click on Mac with Keyboard Shortcut. Yes you can even remove any configured shortcut key within the software and then use the same keyboard shortcut to Click or Get Mouse Cursor Position.

In case you use Microsoft’s Windows Operating System, you can download and try Fixed Point Clicker for Windows and enjoy the same functionality on your Windows Computer. Yes you can download and try the software for Free. Clicking Mouse with Keyboard Shortcut was never so easy and accurate to do. Whether you are using Mac or Windows, clicking Mouse with Keyboard Shortcut at fixed screen location is now easy and accurate to do. 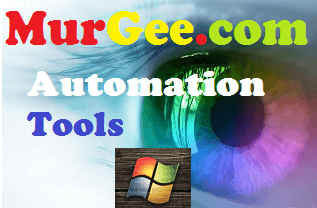